Editor’s note: This is the first in a series of stories on BeiGene colleagues, what motivates them, and how they pursue their commitments inside and outside of the company.

The decades-long journey that brought cancer research fundraiser and BeiGene executive Michael Schoen to this weekend’s Pelotonia Ride began just 10 miles from the event’s starting line, in his hometown of Westerville, Ohio.

Schoen will push off as one of thousands of riders who commit to pre-determined fundraising targets and rides over a range of distances to support The Ohio State University Comprehensive Cancer Center – The James Cancer Hospital and Solove Research Institute in Columbus, Ohio. But he will stand out as one of the top fundraisers over his 12 years of participation.

“The Ride,” as organizers and participants call it, is the centerpiece of Pelotonia’s year-round fundraising efforts. Since its founding in 2008, Pelotonia has raised more than $200 million for cancer research and directs 100 percent of every dollar riders raise to the center. Schoen plans to complete 180 miles this weekend, over two days, as he has in the past.

“Pelotonia would not be possible without Michael and his fierce commitment to the event and fighting cancer,” says the organization’s CEO, Doug Ulman.

The not-for-profit Pelotonia and the ride are in no way related to the Peloton brand of exercise equipment, having been established years before the company’s internet-connected stationary bike was released in 2014. 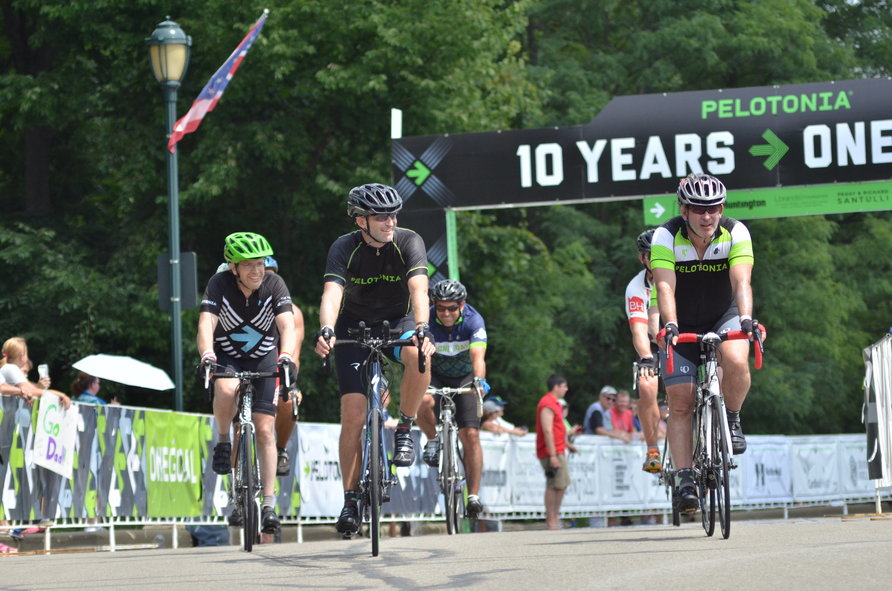 Schoen’s relationship with the Pelotonia Ride and “The James” is rooted, in several ways, in his childhood in Westerville, a suburb of Columbus, with a population of some 41,000. As he tells the story, his father had grown up wanting to work as a sportswriter. He was attending college on the G.I. Bill in the late 1940s to pursue his dream. However, when Schoen’s grandfather was stricken with cancer, his father was forced to leave school and leave his dream behind.

“Always in the back of my head was the thought that cancer derailed his dreams, and I should do something about that,” Schoen recalls.

After graduating from MIT with a B.S. in management, Schoen entered the world of investment banking. For 30 years, he worked in emerging markets, including a two-year stint living in Brazil, and raised a family with his wife, Kathleen.

‘About as Bad as They Get’

As a young professional, the memory of his grandfather’s illness and its impact on his father spurred him in the early 1990s to make his first contribution to cancer research. It was a donation to one of the world’s most prominent cancer centers. The uninspiring form letter he received in response – “it was about as bad as they get,” he notes – motivated him to find a more meaningful way to help fight cancer.

“As luck would have it, a good friend from high school was doing development work for The James at the time,” Schoen recalls. “And he said, ‘You should check out what we’re doing.’”

Schoen did. And as a result, in 1999, he and Kathleen established the Herman Schoen Memorial Cancer Research Endowment Fund, which supports cancer research at The James. They created the fund, he says, “in memory of my grandfather and to honor my father.”

*in the image (L-R) Pelotonia CEO Doug Ulman, Michael Schoen and his brother, Ben, gather following completion of the 2019 Pelotonia Ride in Ohio. 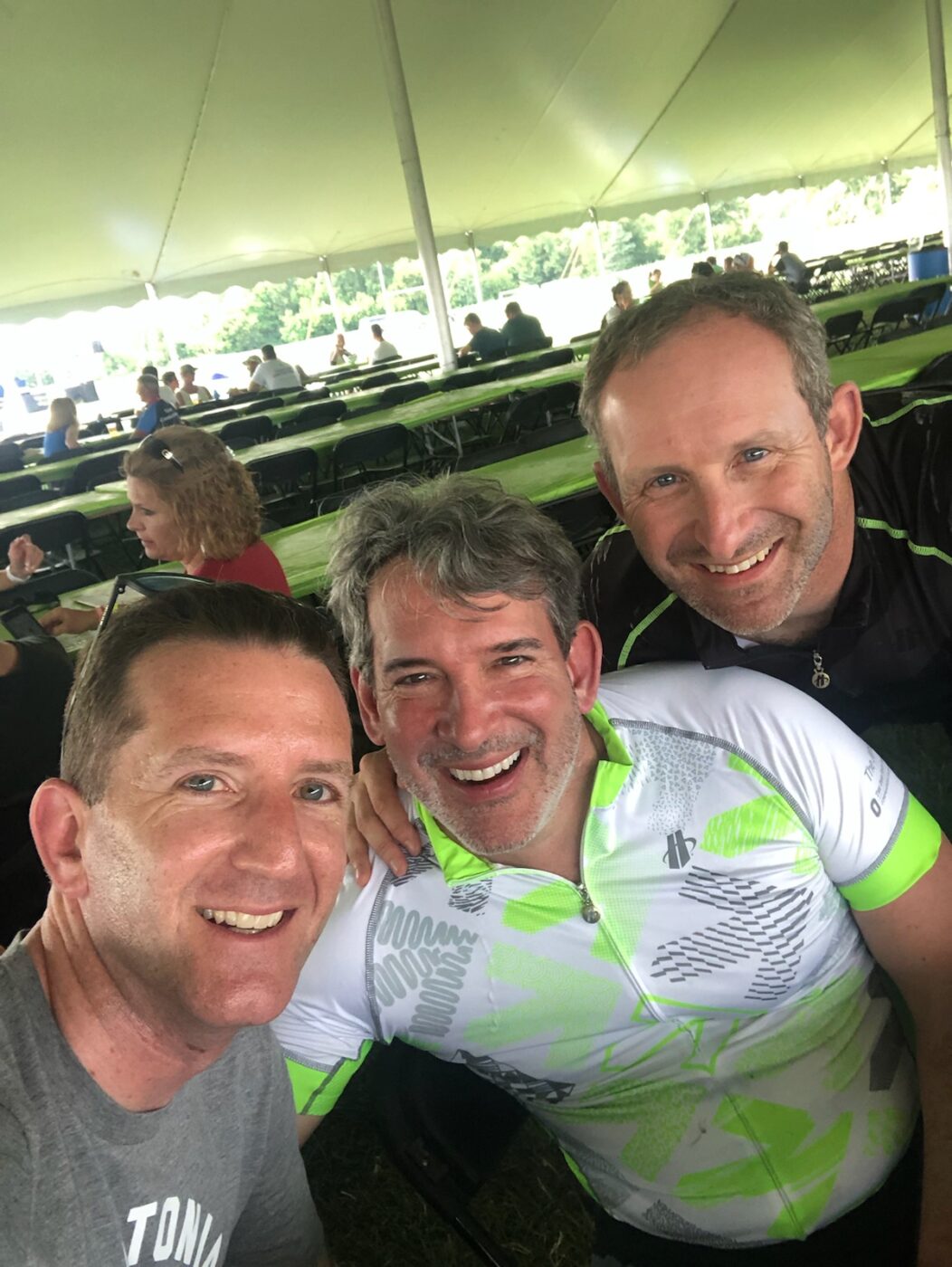 At an Ohio State football game in 2008, he met Dr. Michael Caligiuri, then CEO of The James. “It was supposed to be a 10-minute meet and greet, and we spent the entire first half of the game talking,” Schoen says.

“He described his vision for a cancer-free world, and his plans to totally revamp The James, to build a new, state-of-the-art center that would bring together research, education and treatment in a way that had never been done before,” Schoen continues. “We hit it off.”

Later that year, while working in Switzerland, he received a call from his wife, who told him that his mother had been diagnosed with small-cell lung cancer. Schoen returned quickly to see his mother, who passed away days later.

*in the image Michael and Ben Schoen during a 2020 virtual Pelotonia Ride in South Carolina. 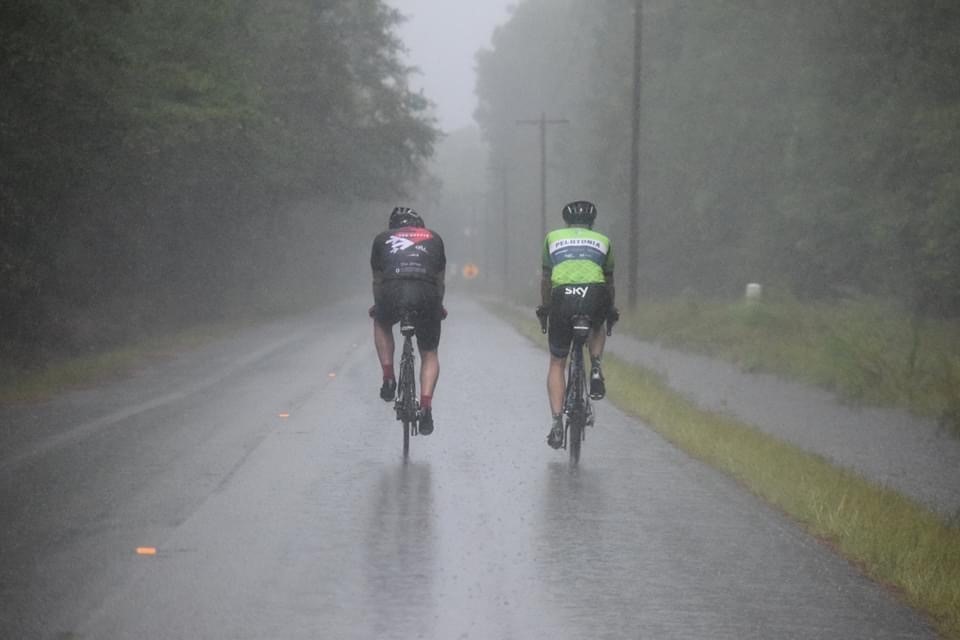 “I was pretty devastated,” he says. “I didn’t expect to lose my mom at that point in my life. But it was a wake-up call that I really cared about what I was doing with The James and that this is really where I wanted to put more of my energy. The idea that I get to do this with Pelotonia and that, now, my day job is trying to beat cancer at BeiGene, it’s truly a blessing.”

Just eight months after his mother’s passing, he rode in his first Pelotonia event. “It was cathartic,” he explains. “And I committed then, to my father, to ride (in Pelotonia) until we beat cancer, or I cannot ride.”

Schoen – who serves as chief of staff to BeiGene Co-Founder, Chairman and CEO John V. Oyler and senior vice president of Business Operations – credits the company with providing him the flexibility to pursue his charitable work. “BeiGene and my colleagues have been incredibly supportive, in every possible way,” he says.

With that support and his personal commitment, Schoen will line up again for the Pelotonia Ride, just miles from where his own journey started.

*in image President Joe Biden and his wife, Jill, flank Michael Schoen (second from left) and Ben Schoen, at the opening ceremonies for the 2017 Pelotonia Ride. 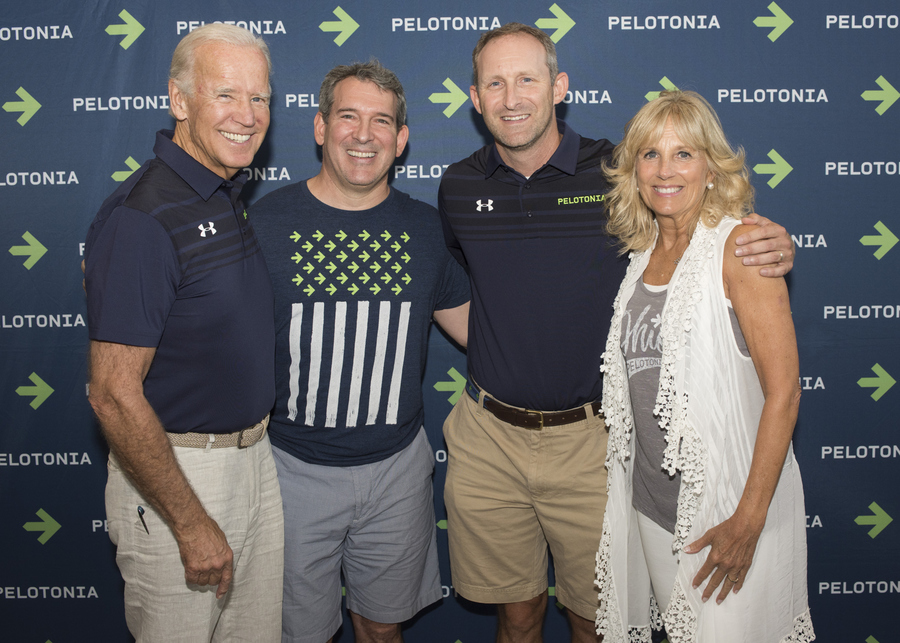